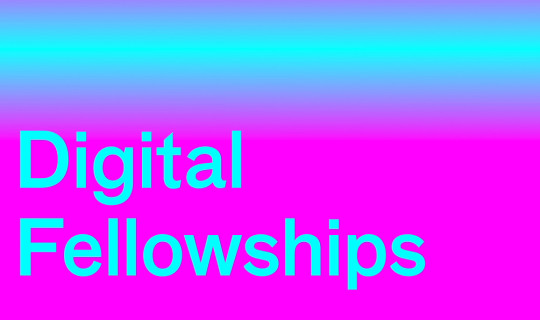 We are pleased to present an online presentation of newly developed works by the ten alumni artists participating inNew Contemporaries Digital Fellowship (NCDF).

The fellowship has been developed in partnership with Artquest, Furtherfield, and LUX, and has supported the production and distribution of new digital works by early career artists through a programme of mentoring, workshops, talks, crits and peer networking, alongside financial support in the form of an artist fee and production bursary. This project was made possible with the support of a Project Grant from Arts Council England.

The 10 artists presenting works are:

Alice Bucknell, The Martian Word for World is Mother, 2022.

Merging science-fiction strategies, 3D worldbuilding, plant magic, language AI's, and critiquing contemporary architectural proposals for the habitation of Mars, The Martian Word for World is Mother explores three speculative futures for the Red Planet, and who gets to decide. Working with Martian science-fiction, Donna Haraway's theories on the nonhuman, and the emergent field of space law as its narrative backbone, the project complicates and extends our thinking of and our relationship with Mars. Presented across three planets - Red Mars, Green Mars, and Blue Mars - it examines the political, ecological, economic, metaphysical, and linguistic parameters framing contemporary discussions of Mars. 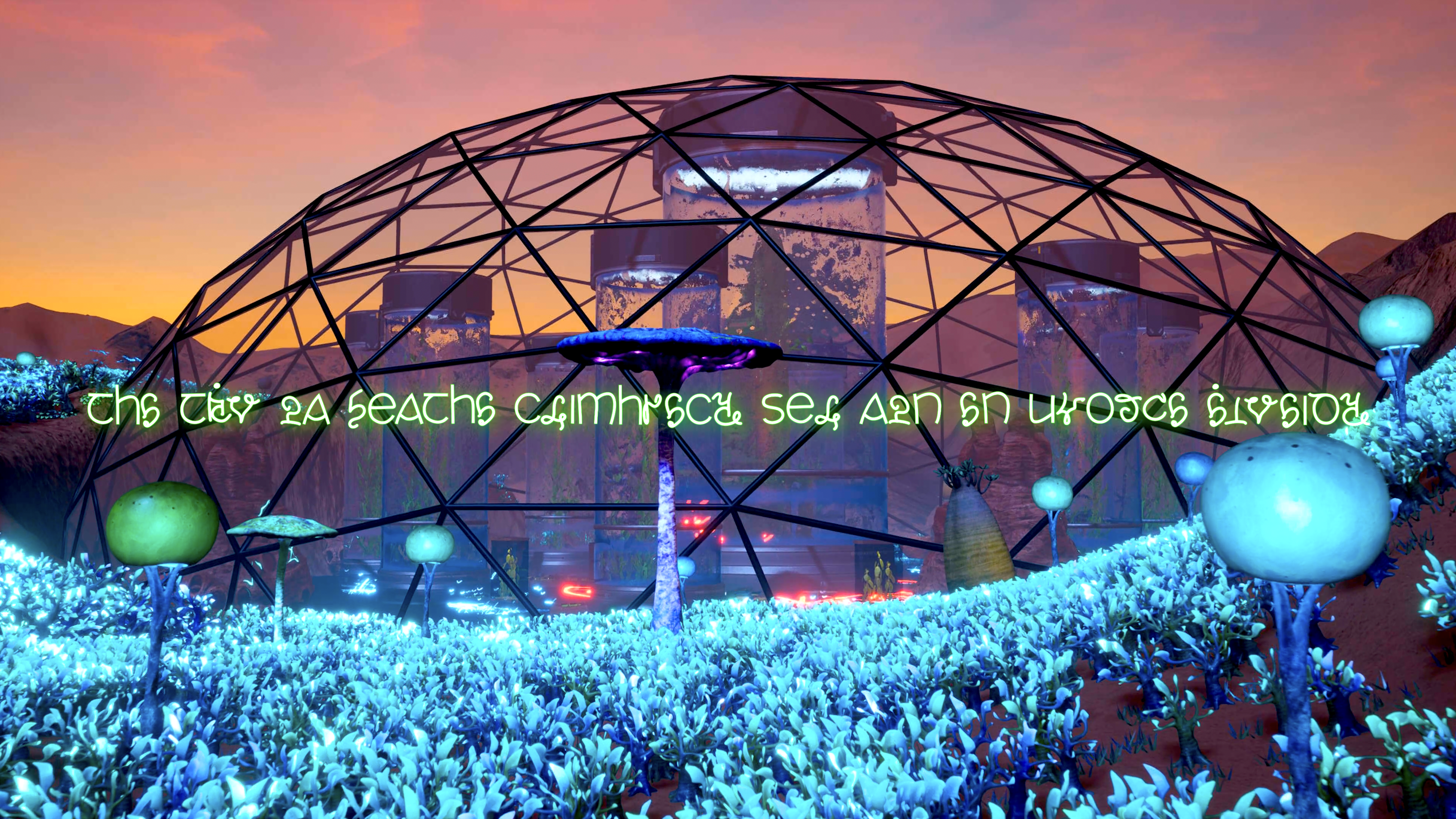 Alice Bucknell, Still from The Martian Word for World is Mother, 2022. Image courtesy of the artist.

Benjamin Hall, Where the Mouth is [Machinima Version], 2022.

I have spent the fellowship adapting a pre-existing videogame work into a parallel prerendered film version, or ‘machinima,’ with an eye towards audiences without gaming fingers. Set in the Saxon-era archipelago once where Oxford now stands, "Where the Mouth is [Machinima Version]” (re)builds Oxfordshire as a world outside of time, leaping off from the collections of the public Museum of Oxford. The mouth of that collective memory has issued many truths, half-truths, desires, cries, anecdotes and apocryphal stories. Find (re)enactments of many of these past, present and future narrative in the ritual of beating, as moments of time overlap at charged locations from around Oxfordshire. Frideswide, Amy Robsart, Blackbird Leys, cattle drovers, camptosaurus and large chrysalis snail inclusive. Watch the sun race across the sky, time slow, and feel tiny reminders of a future from the past. 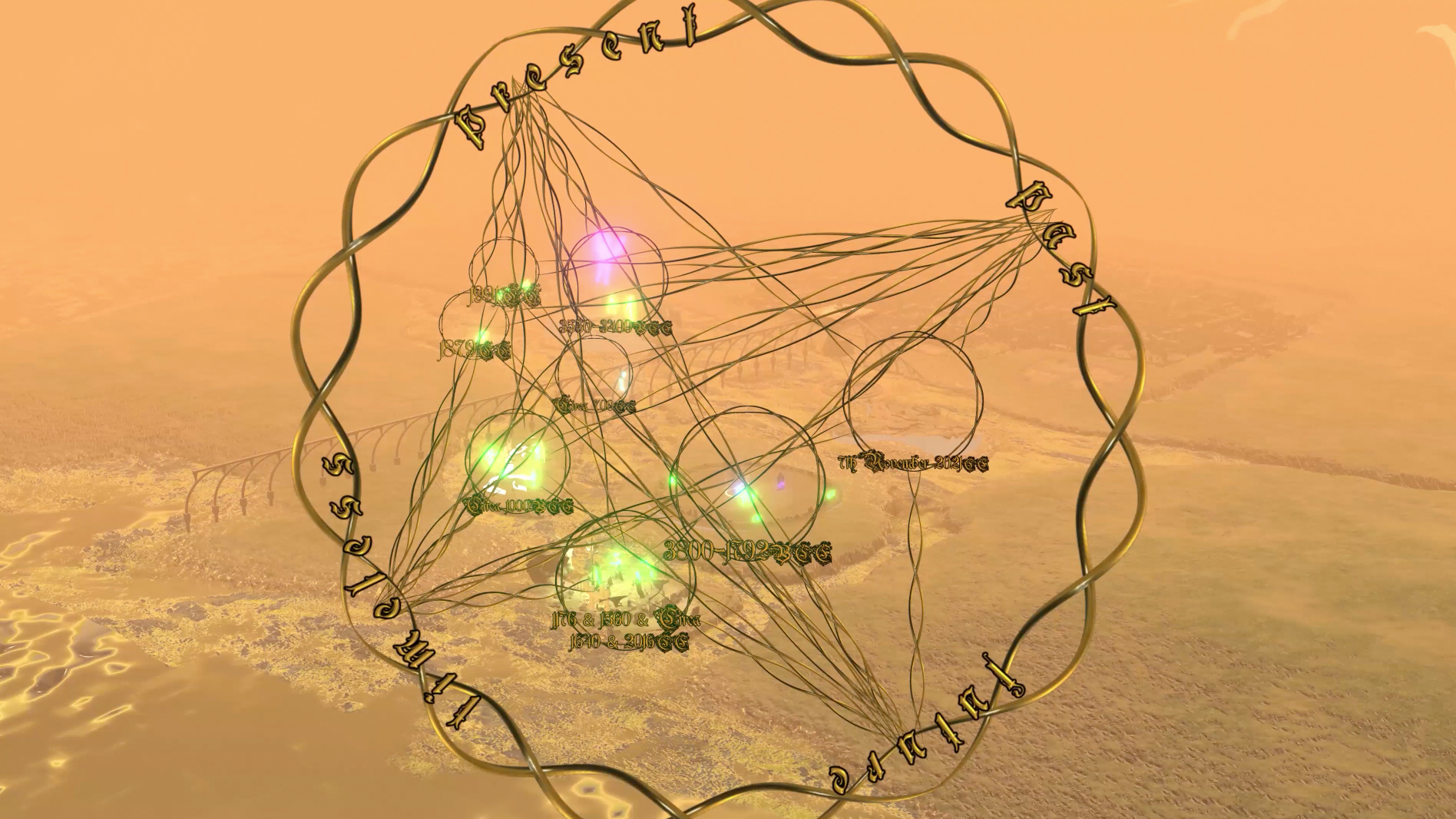 Benjamin Hall, Still from Where the Mouth is [Machinima Version], 2022. Image courtesy of the artist.

Serena Huang, The smoke from our chimney formed their sky, and in much the same way, their smoke made ours, 2022.

During the digital fellowship, I have been looking at where my practice in physical form can be extended to digital formation and vice versa. Resisting pure remediation of the work, but providing the work with another layer of suggestion and an unfolding the research and continued narratives. “The smoke from our chimney formed their sky, and in much the same way, their smoke made ours.”, is an installation of scenes, props and a 25-min sound track inspired by previous Zoom play Sky Empty天空. The project references research around historical facts, anecdotes, and mythology, which will continue to unfold themselves in a digital play [“OF COURSE I AM LYING!”, he shouted on the phone as the thunder split open an apple tree] on 22nd June. 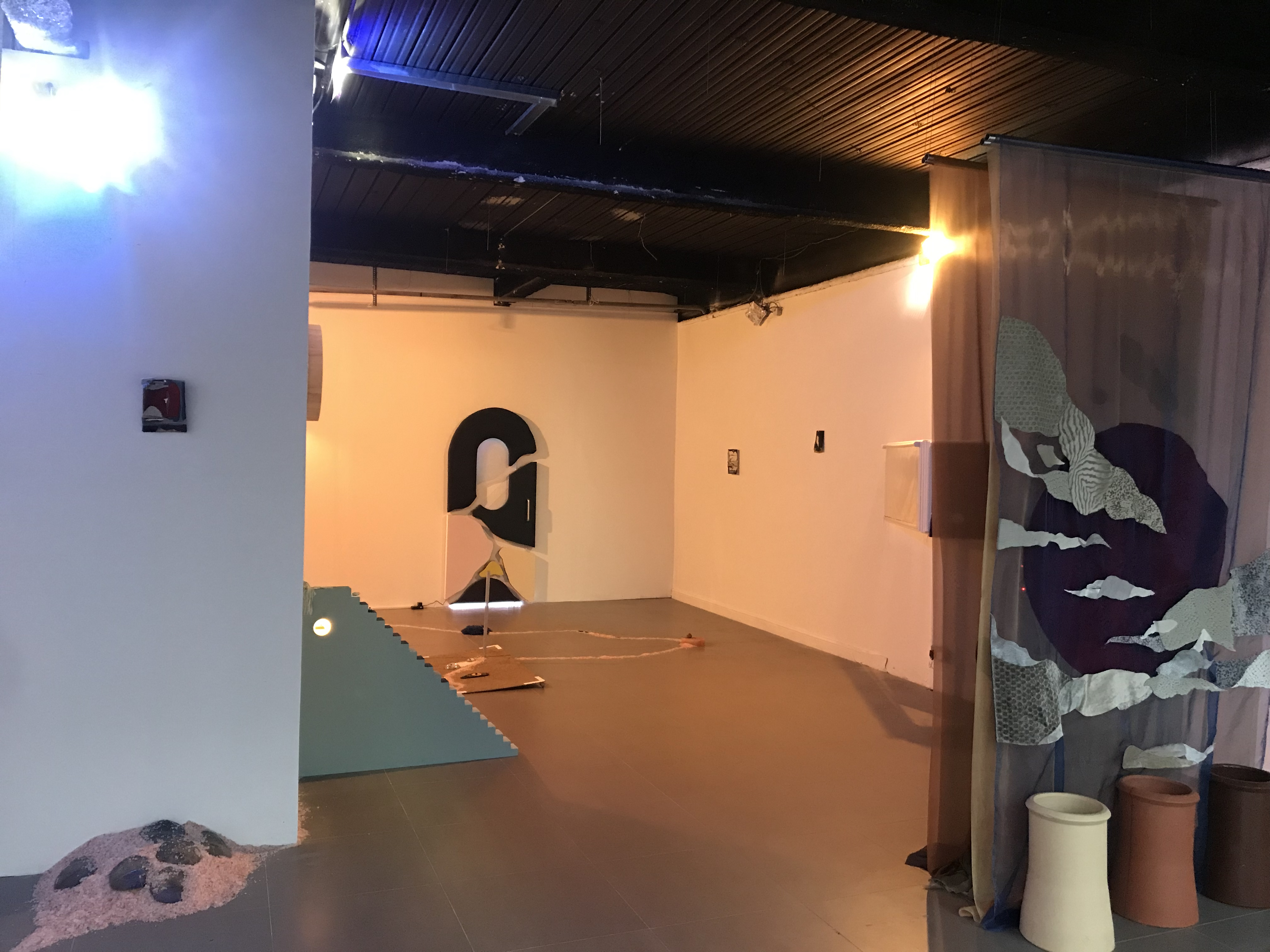 Serena Huang, Installation shot from The smoke from our chimney formed their sky, and in much the same way, their smoke made ours, 2022. Image courtesy of the artist.

The selfie photography of Maria Mahfooz, featuring many never-before-seen personal images from one of the most recognisable and iconic celebrities in the world. From her early beginnings as a medical counter assistant, Maria Mahfooz has catapulted herself into becoming one of the most recognisable celebrities in Manor Park, East London. Widely regarded as a trailblazer of the "selfie movement" a modern-day self-portrait of the digital age Maria has mastered the art of taking flattering and highly personal photos of oneself. For the first time in print, this book presents some of Maria’s favourite selfies in one volume from her favourite throwback images to current ultra-sexy glam shots and provides readers with a behind-the-scenes look into this larger-than-life star. 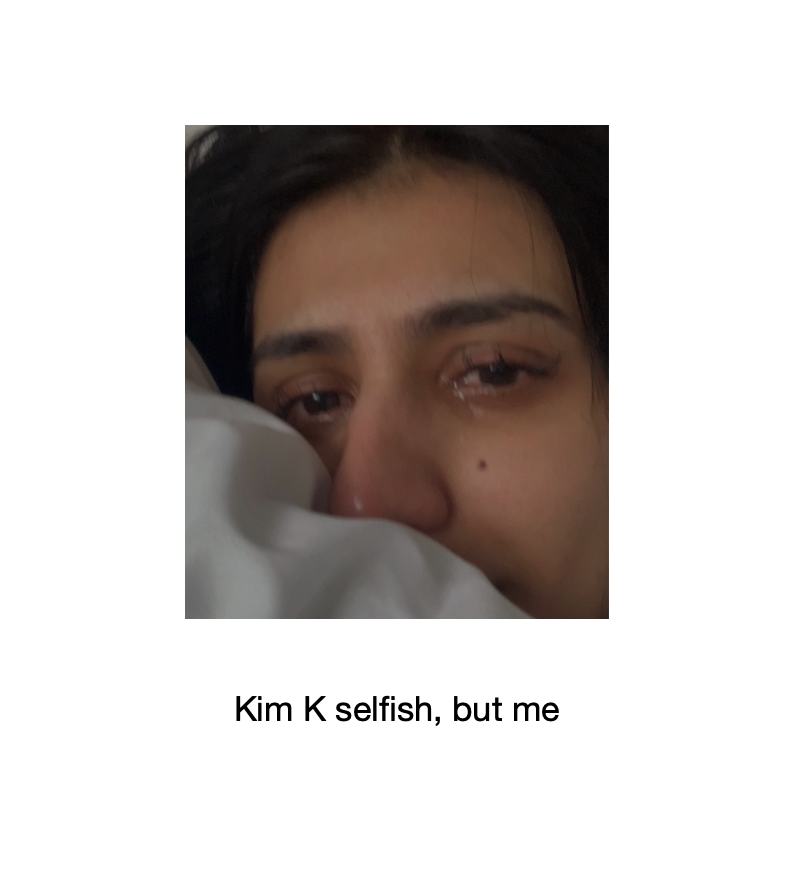 Maria Mahfooz, Kim K selfish, but me, 2022. Image courtesy of the artist.

During the course of the NCDF I was fortunate to be able to experiment and explore a variety of approaches to making work. These approaches included using writing, spoken word, still/moving image and sound. The outcome of this was a range of different works in progress that I will be developing further in the future. Through a number of critical conversation with my NCDF mentor Simeon Barclay, I gained a new understanding of my work and developed new approaches, which I've found extremely helpful.

Kamile Ofoeme, Still from When I Say Brix, You Say Ton, 2022. Image courtesy of the artist.

The process of recording my footage started from the idea of cruising in the city and observing strangers in a somehow polluted public space. Capturing the small gestures of intimacy, plurality of isolations becoming a collective object and various gradients of waiting. What became clear in the past few months, was the renewed sense of voyeurism after a series of social restrictions. The work shifts between concentrations of movement, anonymous presences and diluted attention. 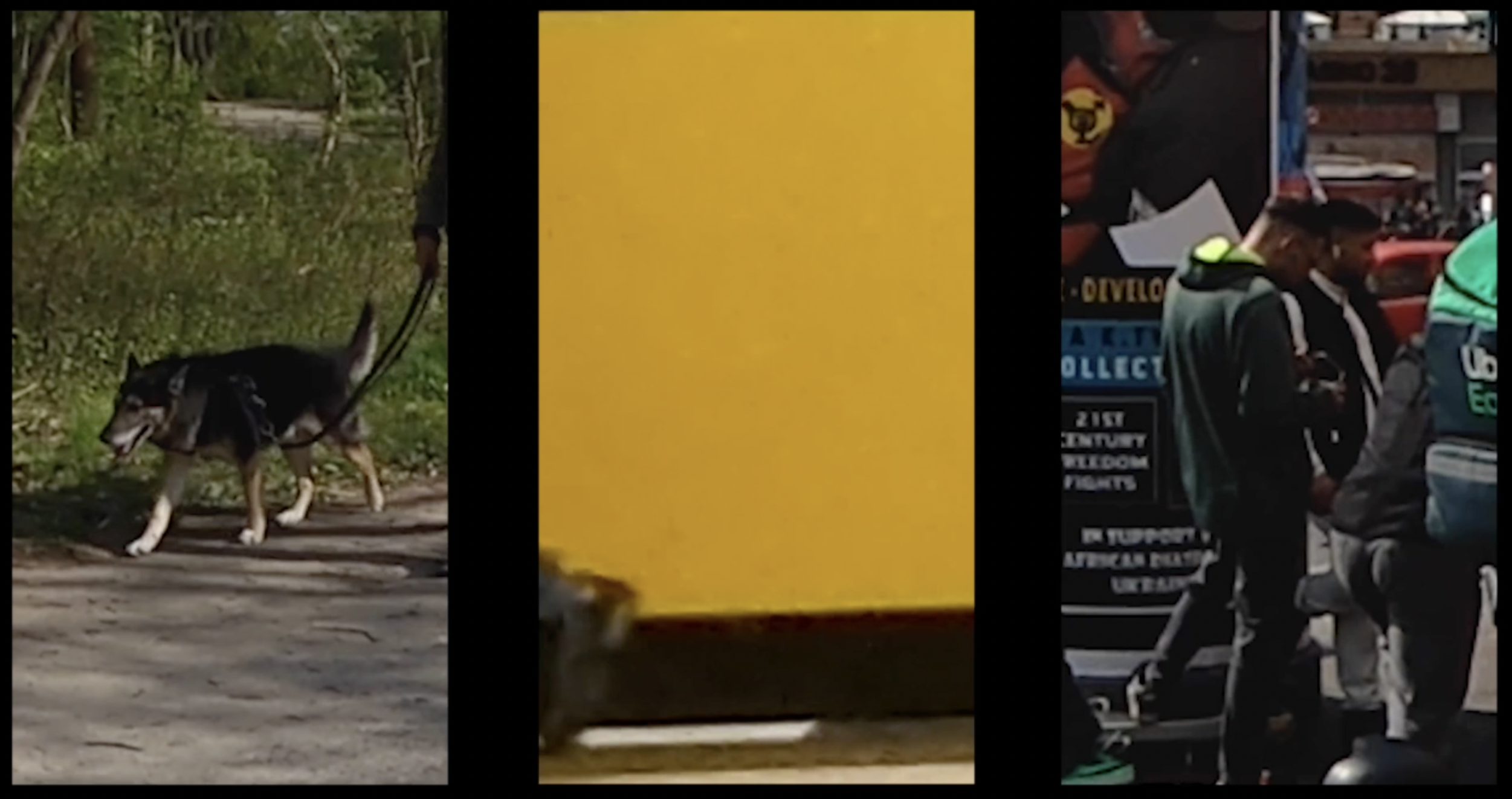 Aaron Ratajczyk, Still from -ones and -oters, 2022. Image courtesy of the artist.

The work that I have started for this Digital Fellowship is tied to a larger sphere of research, in where I am archiving the ways in which Black and indigenous migrants from 'Latin-America', as a relatively young migrant group in London, contribute to London’s/UK's diasporic collective identity. In thinking of these groups as a 'future,' I am interested in how our cultural and emotional matter informs a prospective 'latinized' London, in an already Africanized UK and Europe; focusing on our mergence with existing migrant groups, weaving through possible frictions and affinities. Through regular visits and photo/video documentation of night-life and domesticity in these various diasporic dimensions (the 'third-world'), I hope to be active in the processes that would empower this community to manage and interrogate visibility. 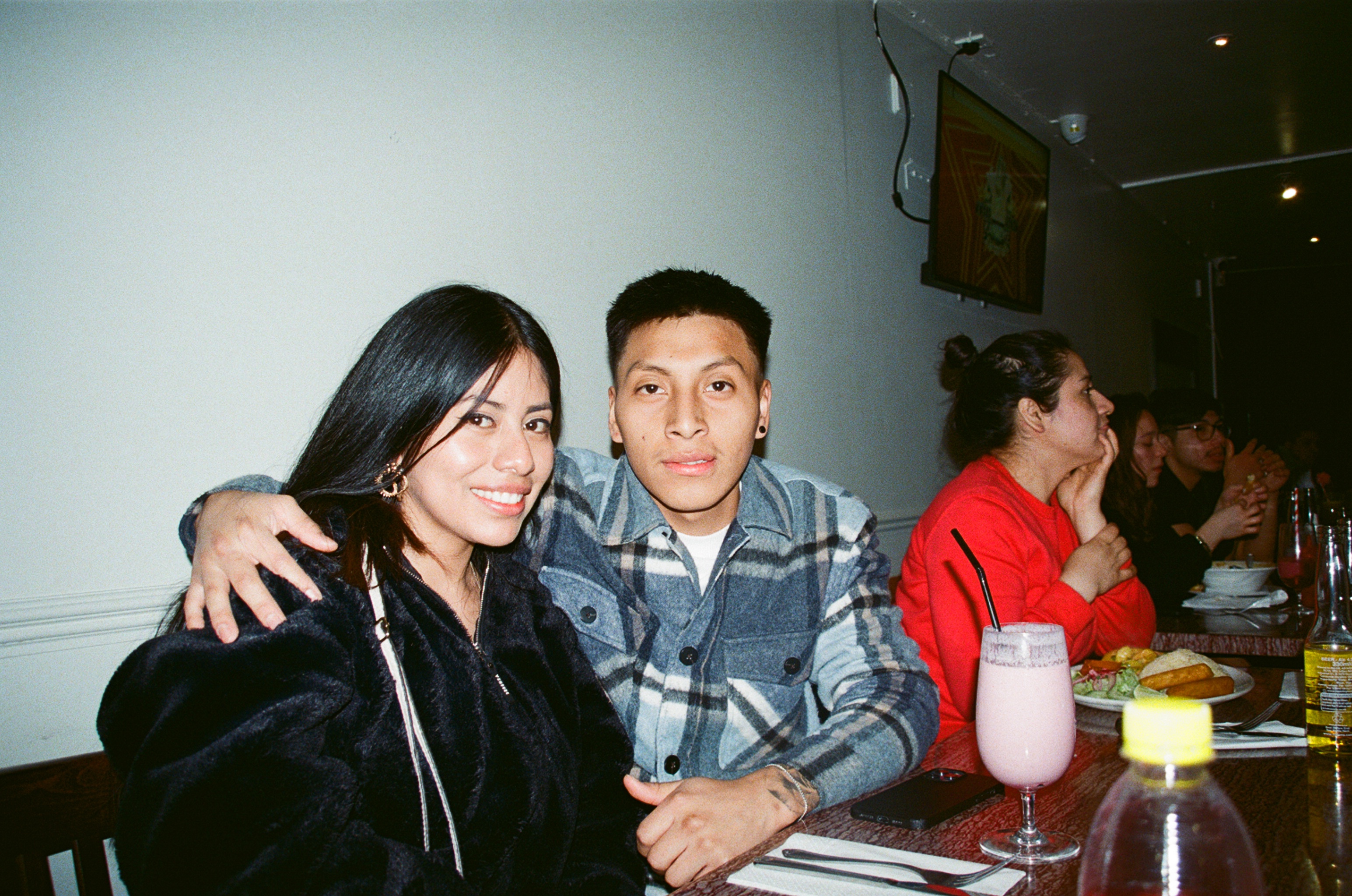 My research is based on the Scottish Traveller oral archives at the School of Scottish Studies Archives — my grandfather was from Scottish traveller heritage, but this was considered a shameful secret and kept hidden for two generations. I knew nothing about the tradition at all before starting my research. My found footage film re-imagines this lost fugitive legacy through a sonic loop — attempting to articulate in a compelling way, the long term consequences of forced assimilation and loss of belonging to the later generations, those who, like me, are born into such an environment of silence and outright denial. 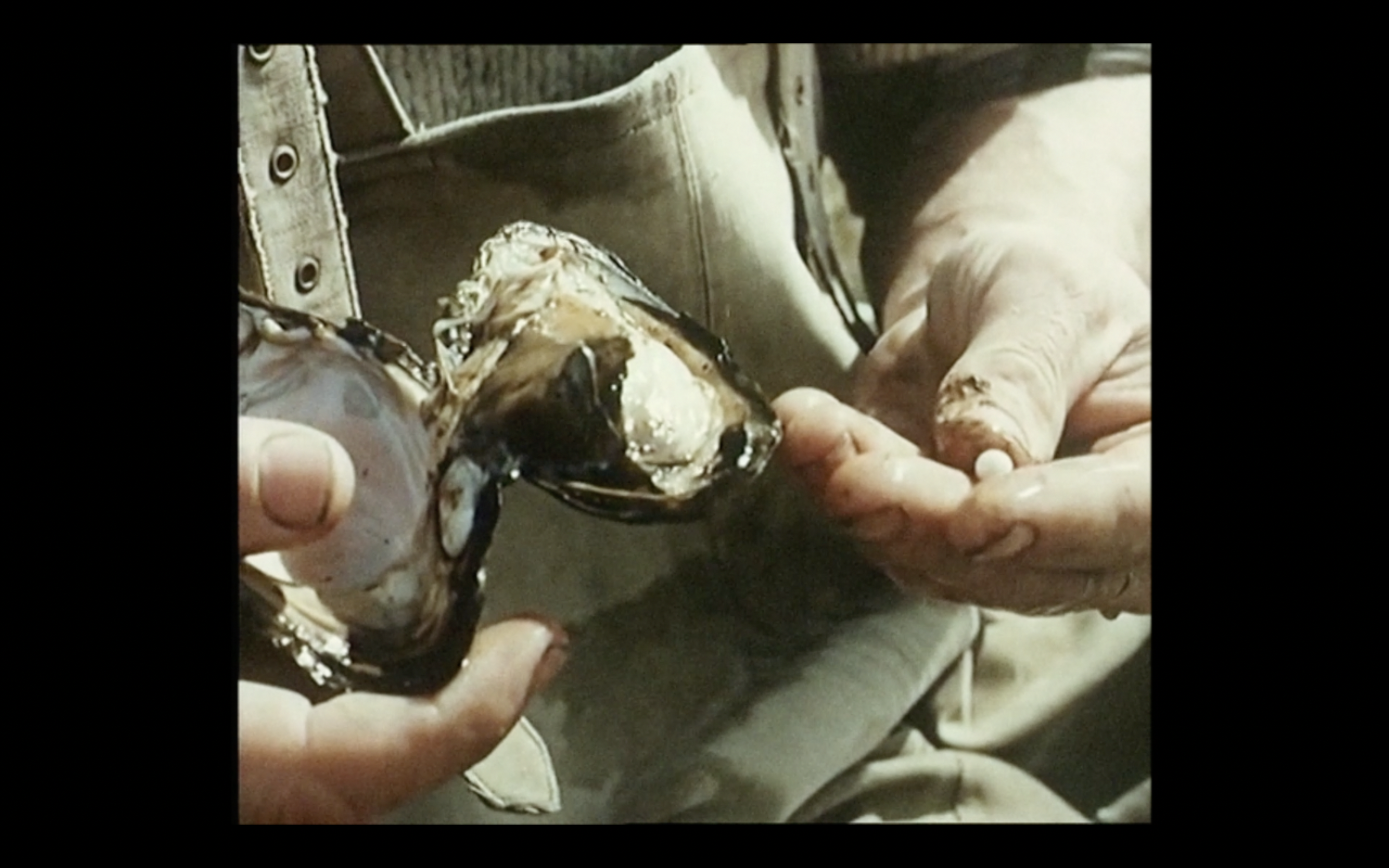 Wilma Stone, Still from As Marvellous Means of Foretelling Future, 2022. Image courtesy of the artist.

Maryam Tafakory, Where Is She, ongoing.

The excerpt that I'm showing for this fellowship is part of a long term project that I've been working on for some time. It's part of a series of video essays that I've been making on the binaries of women in Iranian Post-revolution Cinema, a project that I was initially invited to make for a peer reviewed videographic journal called In Transition. Much of my recent collage work draw on film history, specifically the sixties to eighties Iranian calendar films that I spend much time with as a teenager. This particular excerpt is from a video titled Where Is She that uses seconds or fractions of seconds from different films, different scenes that depict violence as trivial and ordinary. I use different image manipulation techniques and try to reedit and rewrite these scenes into something else. 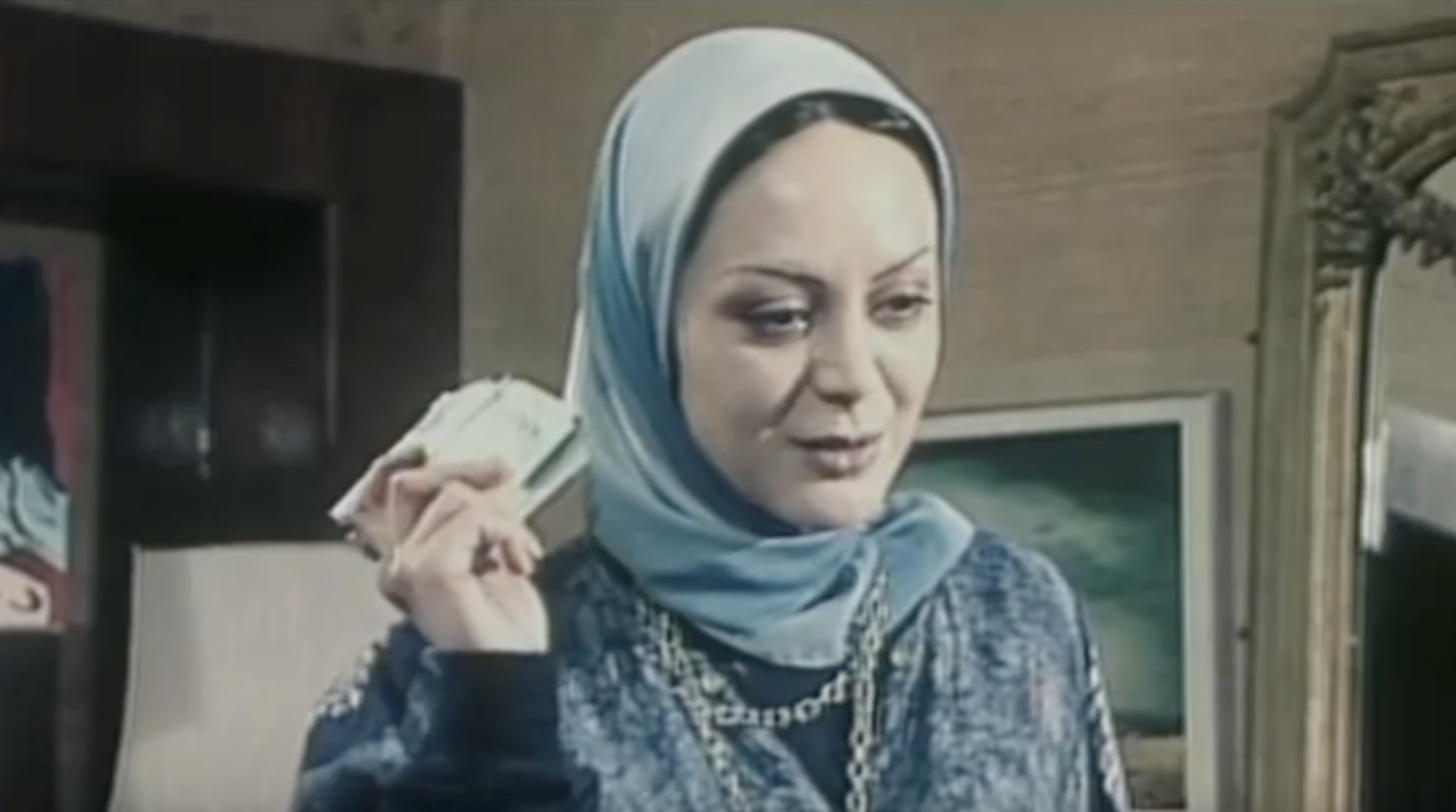 Maryam Tafakory, Still from Where Is She, ongoing. Image courtesy of the artist.

Sandra Poulson’s practice discusses the political, cultural and socio- economic landscape of Angola as a case study to analyse the relationship between history, oral tradition and global political structures. Her practice draws on family and inherited societal memory from colonial Angola and the civil war to dismantle contemporary Angola through semiotic readings of ordinary objects, such as household items, as actors in ongoing political and cultural transformations. This process inherently draws on ideas of decoloniality. Poulson’s work recurrently revisits the body as a liminal space for discussion, operating in an interdisciplinary way through large-scale wood installation, garment making, photography, printmaking, performance, video and writing. 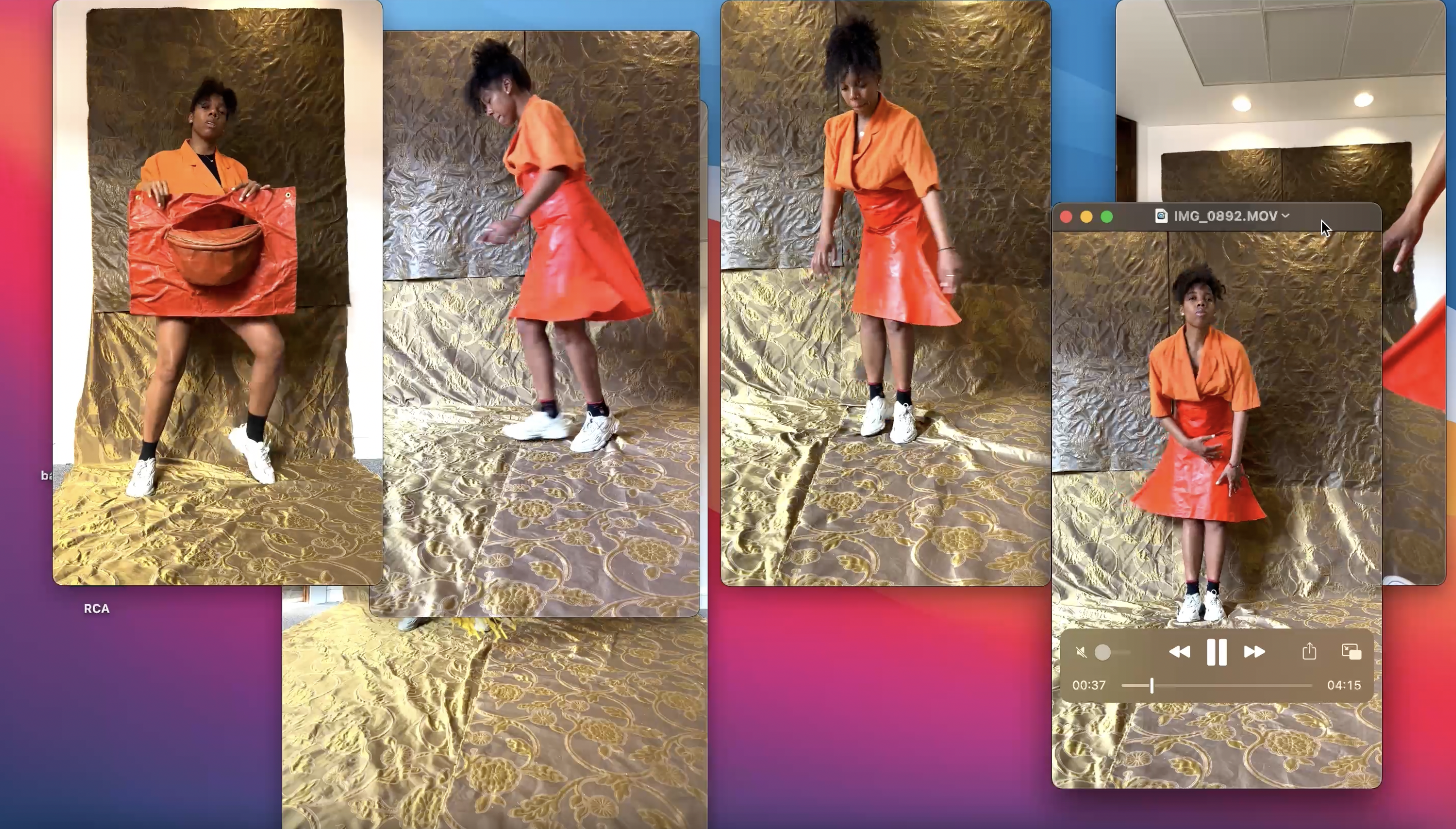 Sandra Poulson, Still from An Angolan Ballet, 2022. Image courtesy of the artist.