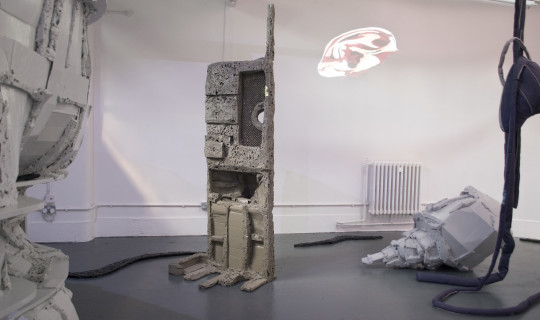 I describe my work as awkward lumps. The word awkward stems from the Norse word ‘afugr’ meaning ‘turned the wrong way’. Upside down, inside out and in the wrong place. My selected work Economy Class was originally intended as a boundary wall with an orifice. I built a wooden frame. Quickly the process of cladding materials growing across the surface blurred the intention. The meaning loosened, was it organic or synthetic, an elephant or an airplane door? It came to be likened to a massive mobile phone, nicknamed ‘the motorola’ by friends.

A mobile which is too big to move would be an awkward synthetic lump. An inept object becomes stuck, wedged in place, sunk into the mud or caught between two rocks. Over time, the environment and context would change around it. It would be out of place. An embarrassed, self-conscious object. It would attract attention from those passing by. A fish out of water.

There is a vulnerability to being placed in space. Clothes and possessions are our shields of defense and protection. What if your possession was an awkward oversized mobile phone?

Stagnated in the landscape it would be subject to the colonization of bacteria, mosses, lichen, algae, and fungi. Field mice could make a nest in the enormous charging port. Passersby could stick chewing gum to it. Limpets and barnacles could cling to it - their calcium carbonate shells becoming physical traces of the object’s memory. When something grows all over the defunct awkward object, this once relevant item becomes the bedrock for future growth. The object is both of the ancient and of the future. A site for beginnings. From the awkward springs the joy of growth, the joy of the generative and the joy of making.