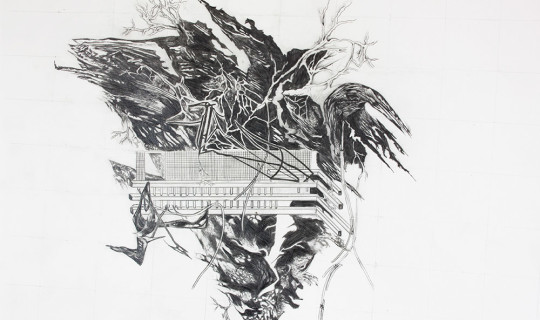 Ectomycorrhizal fungi, which grows in the upper organic horizons of forest soils, retains and cycles Caesium-137, a radioactive isotope of caesium.

Caesium-137 can then be extracted from devil tooth mushrooms and used to create radiological dispersal device (RDD) aka dirty bomb - a combination of radioactive material and conventional explosives.

I acquired Caesium and other RDD components from Internet sellers and eBay. The chemicals are injected into the sculptures and transferred to other sculptures via plastic umbilical cords. The sculptures are now infected and toxic. The museum fears the works will leak and omit some poisonous gas. Fear is also like a bomb; it explodes with the news of a natural disaster, a health scare, an attack, a rumour. Fear is a global environment.

It is interesting that as we pollute our environment, that pollution can then be accumulated and transformed via fungus and other plant life. Humans harvest the fungus and extract Caesium-137 to create weapons against humans. The metals and chemicals dispersed by the RDD are then absorbed back into plants and forest soils. Pollution undergoes a seemingly organic recycling process.