Sophie Giller: 9 months in her Studio at One Thoresby Street 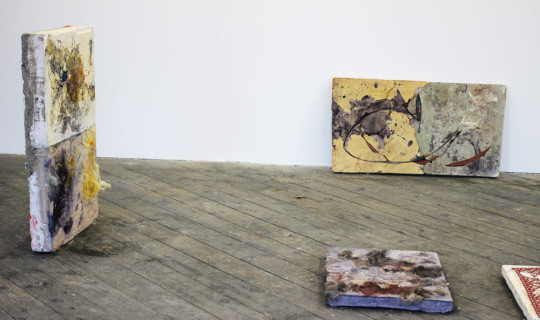 Two-thirds into my residency and I don’t want to leave. Having a studio up lots of stairs made me initially want to try and avoid casting with plaster and concrete and delve into my bags of fabrics, but trying to put a limit on it was no good and I’ve been casting like crazy!

I don’t know what it is about casting that I find so addictive.. I think it’s maybe the speed of it, how quickly the material turns and transforms, forcing a pace and I’ve got to keep up with it. But once it’s done, it’s done and forced itself into the positive space of whatever I’ve put it into. I suppose that’s where my fixation of re-packing and preserving things comes into it, and there I am throwing all kinds of stuff into the mix and freezing solid lots of things that once were functional and moveable. So they become exercises in what form, what object to alter, what to pull into whichever frame or box. The items cast in these recent works are about work and activity. They are a mélange of gifts and waste by-products from other processes – from industrial to domestic; insects to animals.

Alter something, try the next thing; an exhaustive process which suits me.